I thought it was going to be harder than it was…

I didn’t know what to expect having never done it before. Last year, I was forced to work that weekend and the year before that I was just starting to dip my toes into racing and frankly, did not believe in my ability to race up a 14’er. So this year was it. I was also planning on racing the Senior Road Race State Championship the next day. Go big or go home.

Because both races were based in Colorado Springs, Chris and I found an AirBnB to stay at to shorten our commute time. Even though we were an hour closer to the start line, we still had to wake up before the asscrack of dawn – like 4:00 AM.

As Chris drove us toward the start line, I felt like we were cheating as we were halfway to the top of Pikes Peak when we finally parked the car. The sun still hadn’t risen as we picked up our race tags from the registration tents. Because it was my first year racing, I didn’t know where the actual start line was and I never had time to pre-ride the course so I didn’t know what I was in for.

As I pulled out my trainer, I realized I left my Garmin at the AirBnB. You realize how dependent you are on things when you no longer have access to them. Luckily, I had my watch, but I was still perturbed by not seeing my watts, cadence, and heart rate updating in front of me as I warmed-up. 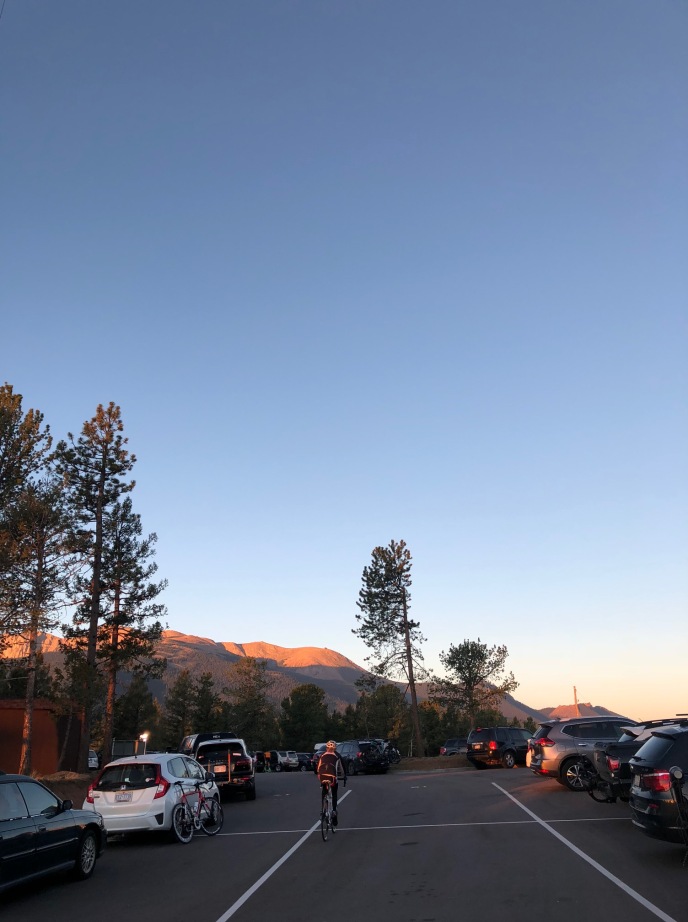 The gran fondo participants took off before the racers, so I wished Chris good luck and told him I’d see him later. I joked with him saying, “I’m going to try to catch you.” I didn’t think I actually would since they started nearly an hour before.
The Cat 3’s were called up to the start line. All six of us. I don’t know why I always do this to myself, but I lined up in front. My only strategy was to copy what happened to me at the Guanella Pass Hill Climb: take off at the start line, drop everyone, and you know, hope they don’t catch up.

I’ve learned (the hard way) this season that I’m not the strongest hill climber.

So, I did just that. As soon as the ref whistled  (after what felt like a very long and uncomfortable silence as we waited for him to countdown to 3-2-1..), I shot off, of course, with a couple of other women. Since there were only six of us, I split the group in half. Another thing I seem to do far too frequently is hang out in front of the paceline.

I think it comes down to comfort. I don’t trust riding six inches off the wheel in front of me, unable to see what lies ahead. For some unexplainable reason, I prefer to be in the front, expending more energy than anyone else, but knowing what’s ahead. As soon as I realized I was in the front of the paceline, I tried weaving off the front and slowing down to allow the chicks behind me to go ahead. It wasn’t happening. They slowed down and weaved behind me.

I pulled over even father and slowed even more down. Finally, the two women passed me and I hopped on the back. Well, lucky me, I emptied the tank in the first five minutes believing I could keep a steady pace  while thwarting off the three racers we originally dropped.

I quickly lost the two women who originally broke off with me, so there I was, suffering alone.

I thought to myself: “if no one else passes me, I’ll get third place.” A recurring thought I had when I was a Cat 4. I wasn’t okay with the thought, but then again, I didn’t feel the urge to try harder either. I knew I had a better chance of doing well in Sunday’s race and also realized I climb at a semi-truck pace.

As I passed the gran fondo participants, I looked at their wincing faces, slowly grinding through their third mile of 12. We hadn’t even passed tree line. If I was suffering, I knew these people were right there with me.

All of a sudden, heavy breathing and shifting gears roared behind me. It was the women’s Cat 1-2 passing me. As they pedaled past me like they were on ebikes, they offered a supportive, “you’re doing great!” “…thanks,” I laughed. I almost felt like they pitied me but as we cycled higher, the more supportive people became. I was inspired myself to breathlessly say, “keep going!” to the cyclists I passed.

So many times during these extra-challenging races (climbs up mountains), I consider quitting, throwing in the towel, and giving up. Too many times these thoughts filter into my conscious, especially when I know I’m in the back, about to be DFL, soloing the shit out of the course. It’s easier to quit to when you’re in the back. Everyone’s already passed you, no one’s going to know. That is, until they see results and next to my name it shows “DNF.”

When I think about seeing those three letters, DNF, next to my name, I look 100 feet ahead of me, and keep pedaling. When I want to quit, like in this race, I focused on the next turn. I look ahead and close the gap between me and the rider up ahead. I don’t let my thoughts pervade my mind. It’s too easy to let them control you when you’re 13,000 feet high, no life, just road and rocks and sky.

In racing, when you find your strengths, you hone in on those races. Which means, this was a climber’s course and if you weren’t already fantastic at it, you were going to struggle against the women who also think they’re climbers. The women I lined up aside (and stupidly in front of) are climbers and I respect the hell outta them to push those watts. Frankly, I respect anyone who takes on any sort of race course, especially if this isn’t your forte.

As my category disappeared into the sky, I wondered what my strength was, because I was struggling this season as a mintly Cat 3. Other than endurance, I didn’t come up with a race-specific strength. So I asked myself, “what do I want to be better at? Where am I losing the race?” (Yes. There was infinite introspective during these 12 miles.) Reflecting back on the season, all the races came down to sucking at climbing and sprint finishes. Right then and there, among the wheezers, gaspers, and moaners, I decided this off-season that’s what I’d focus on. 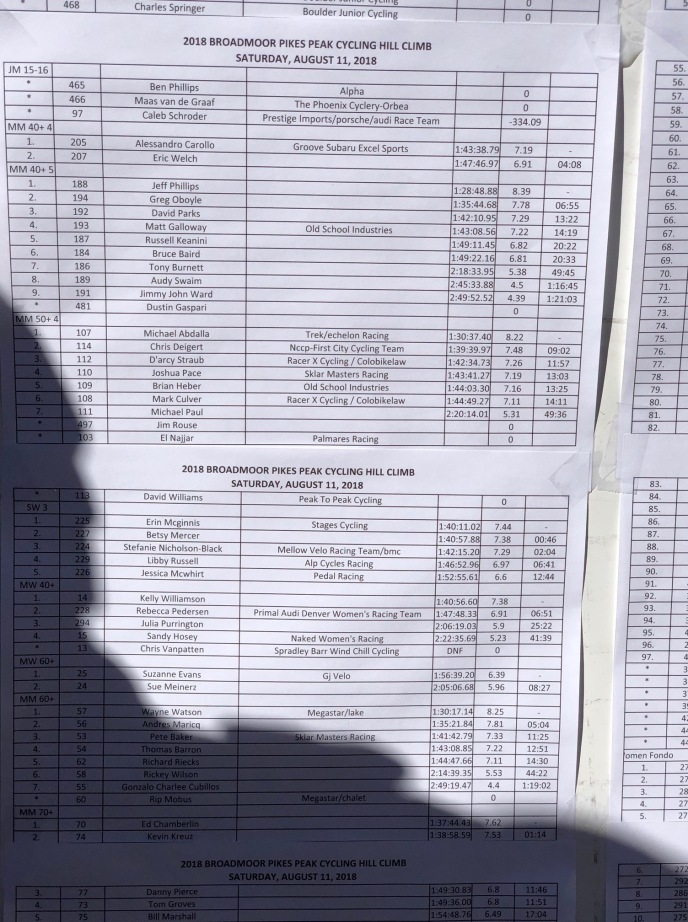 As I looked at my watch for mileage, seeing I still had probably a mile left of this horse shit, I looked up and saw a family of unicyclists. Inspired again, I finished the race, un-enthusiastically, assuming and accepting my DFL before the results posted.

I pedaled to the Pikes Peak sign and watched the excitement of cyclists raising their bikes above their heads, in a victory salute, for having pedaled up the second highest paved roads in Colorado. Realizing that some people can’t even handle driving up this with the thin air, gives you more of a sense of accomplishment having ridden it with a bike, powered by two legs and half-a-mind.