If you continue to ride the same roads with the same people, you’ll only ever know how to ride with that group on that surface.

If you continue to shy away from what scares you, you’ll always be fearful.

“Sunday Funday
OK, let’s go exploring. Planning on doing a long one Sunday morning, mostly road but with gravel mixed in. You could ride a cross bike or a road bike. Route is C470 east to Parker, then keep going east. I want to hit a few new roads while I’m at it (adventure), so some of the easternmost points may alter. 100ish miles, 6ish hours. Meet at the shop at 7:30. It’ll be cold early, then warm. We can stop in Parker on the out or back, but there isn’t much once we head east for services, so have the right amount of stuff. Pace will be consistently tempo, but not brutal. If folks are interested in bailing out or joining in along the route, all good.”

I was first to admit how intimidating Dan’s Sunday ride appeared when he posted it in our Strava club: “That doesn’t look intimidating at all.” To which Dan responded, “I just want to set realistic expectations based on past history. Better to be honest about the possibility of a suffferfest than vice versa.”

I know if it was anyone else leading this ride, they wouldn’t have supported (or was it peer pressure) me nearly enough as Dan. I didn’t make it easier on myself the week leading up to Dan’s sufferfest either. Tuesday, I practiced VO2 intervals, Thursday, I tried keeping up during the pedal RACING Training Ride on Zwift, Friday was leg day, and Saturday I rode with strong teammates up to a paceline clinic where I convinced myself I could keep up with the guys, and then rode back with them.

Needless to say, while I regret nothing, I wish I had the foresight to dial it back a bit before Sunday’s Ride. Hindsight is the clearest sight, right?

Dan’s a strong AF rider with unyielding patience. He proves this time and again — on and off the bike. If pedal RACING had a mascot, it’d be Dan.

I already knew the conditions of the C470 path since I endured it the day before. All shaded areas were an icy patch of fear. Fear for me, at least. I always assume I’m going to slide out (on ice, sand, gravel…) and seriously injure myself. Before we even came close to the ice hill under the C470 highway overpass, I was dreading riding down it five hours later.

It was one thing having to keep myself upright on flat, icy paths, it was a whole other fear factor having to ride down the shit. I remember asking Dustin (who’s a Cat 3 CX racer), “How do I descend that icy hill?”

“Brake before the hill and go.”

Hell, I already had my brake plan down. I wanted to go down this as slow as possible. Dustin continued, “Let your bike slide. Don’t tense up. Have fun with it.”

As a control freak, that sounded impossible. Obviously, I survived it.

Rolling hills feel like intervals. Having to climb up gravel roads and then descend them scares me. I’m afraid of a lot. And this is why I went on the ride. I knew it’d be as much a mental as a physical challenge to ride with this group.

We hit County Road 194 when Dan said, “we’ll be going straight for a while.” As we all turned our pedals, Dan, Wyatt, Dustin, and Shane quickly became smaller in the distance. Even going my tempo pace, peaking at my FTP, I still couldn’t keep up with all of them.

Matthew was in the lone wolf zone too. He kept looking back at me, soft pedaling, waiting for me to catch up. I finally caught up to his rear wheel: “Thanks for waiting for me.” “I figured it was better to ride together instead of separately,” he said.

He was right. My self-defeating thoughts scampered back to their corner as I rode side-by-side with Matthew.

We both wished for the power of the others, but pressed on with our capabilities. Even at Matthew’s pace, my heart raced, my breathing intensified, and my legs wanted nothing more than to sit on the side of the road.

At one point, I was back to riding solo up and over the gravel hills, slightly gripping my brakes out of a false sense of security. As my speed and the wind picked up, my vision blurred. It happens often when I’m wearing my contacts and air blows against them. So, there I was, trying to keep up with the guys, coasting downhill on gravel, not seeing shit. I’d do a hard blink to adjust my contacts in order to see clearly. Sometimes it works.

Dan came back to check on me. I told him loose dirt scared me, especially going downhill. He nodded, “sure.” He pointed out better lines to take and I followed.

Earlier, my tire flatted. I constantly looked down at my back tire to reassure myself it wasn’t flat again throughout the ride.

We were truly in the middle of nowhere and my teeth were floating. Dan held my bike as I hiked behind scrawny bushes, hoping no one would see my bare ass as I squatted over snow. I damn near didn’t care because I had to pee so bad. As I relieved myself, Dan fixed my wheel. I guess it was out of line and I didn’t realize.

As Dustin and I rode together, we saw a cattle dog up ahead, running after our teammates. “You can’t be afraid of them,” Dustin said. “Their job is to herd. Why do you think they can’t herd cows? Cows charge back at them.”

“That makes sense,” I said. I didn’t know anything about cattle herding.

The dog saw us and barked. It started running toward us and as it did, I yelled, “hey, fuck off!” and Dustin pointed his wheel toward it. The dog backed off and I laughed at how accurate Dustin seemed to be about dogs and cattle.

Dustin eventually got a second wind. I still hadn’t found one. He was up with Dan and the group and Matthew and I rode together. More rolling hills. And wind. There seemed to always be a headwind no matter which direction we turned.

I tried to latch on to any wheel I could, hiding from wind and catching any kind of draft that was there. It didn’t matter. My legs were spent. I just wanted to make it home in one piece, or several.

We stopped at a gas station before getting back on the C470 trail. The guys loaded up sugary snacks and Coke for a last twenty-mile energy pump. I ate a messy RX Bar, hoping for some magical energy to get home fast.

As soon as we mounted our bikes, Dan and Wyatt were already gone. No warm-up or anything. Thankfully, the light was red so I could actually catch up to them before it was back to barely keeping up. 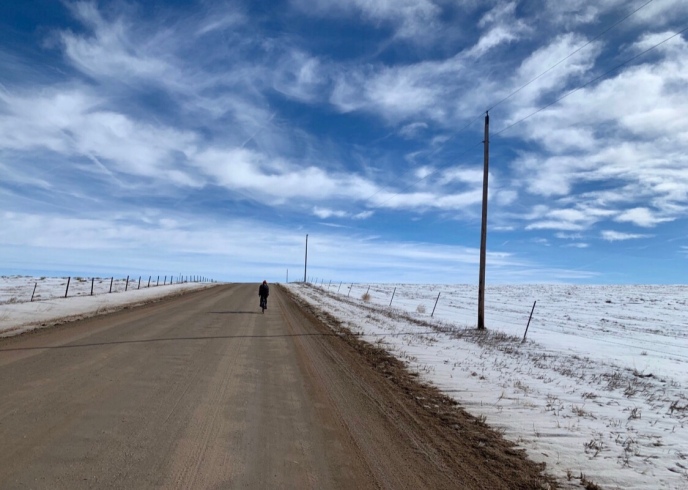 The moment I’d been dreading all day came up as fast as I expected. It was maybe 250 meters of icy downhill and I let it pervade my thoughts for six hours. In an attempt to harness Dustin’s skills, I slowed down and repeated, “calm the fuck down.”

Heart racing, I fearfully rolled down, over the ice, reminding myself to stay lose, keep my weight back, just like descending on a mountain — except I also sucked at that. The guys were already at the light and it had just turned green when I caught up to them.

A wave of relaxation washed over me as Dan and I split from the group and I realized all the hard shit was literally behind me. All I had to do was ride the last four miles to my house. Dan even took the long way home that passed my house, the gentlemanly thing to do. I pulled into my complex when I saw John, our landlord, breaking up ice with a rusty shovel.

I’ve seen Dan’s Sunday rides posted before and never had the guts to join. It was always because of fear. Fear of slowing down the group and never being invited back. Fear of getting dropped out in the middle of nowhere by myself. Fear of looking stupid.

The problem with fear is that we typically let it control us. The unsubstantiated fear we make up in our minds is like a cell we allow to multiply in our thoughts. And our thoughts are incredibly powerful. The quote attributed to Henry Ford says, “Whether you think you can or can’t, you’re right.” It’s cliche, but it’s also true. Cliches are cliches for a reason.

So when Dan told me it’d be fun and I’d be fine, I chose to believe him. I chose to chase failure. When I finally arrived home, after our seven-hour long, “Parker Punisher” adventure ride, my tired legs reminded me that being afraid wasted more energy than riding with other adventurers.

Sign up to receive my latest musings, anecdotes, and tips.